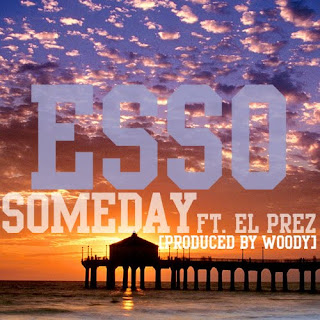 Since first collaborating in mid-2009 on the now infamous Off The Wall, ESSO & Woody have created some of each of their best work with each other. In the year since, ESSO & Woody have continued to work together. Most recently, Woody contributed production on "I'm the Shit," "Alone," "Breakdown" and more to ESSO's 2010 release The Anti-Socialite as well as songs on ESSO's Ascension slated for a 2011 release. Woody has been busy himself, contributing production to XV's Vizzy Zone Mixtape, as well as recently releasing his debut solo album LoveLife.


In the last year ESSO & Woody have recorded numerous songs together, all of which have not been released on their respective projects. While working on Ascension in Los Angeles in September, the two decided to release another collaborative project following in the footsteps of Off The Wall. The EP, titled Californication is a collection of songs that ESSO & Woody recorded while working on The Anti-Socialite in 2009 and Ascension in 2010.


ESSO is most well known for his Off The Wall remix album released in August of 2009. He was featured in XXL Magazine's "Show & Prove" section in August 2010, and named one of Beyond Race Magazine's "50 Artists to watch in 2010." Two of his videos "Don't Stop" (Off The Wall) and "New York, New York" (The Anti-Socialite) have made it into rotation on MTVJams, and BET's "The Deal" tapped him to participate in a conversation about the future of New York Hip-Hop. He is currently preparing his EP Californication for a November release, and his album Ascension for an early 2011 release.
download and listen here