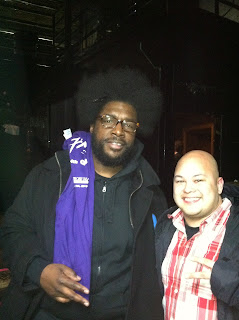 I (Zeke) got a chance to talk with Questlove. Who played drums along side Bobby Z from Prince and the Revolution at First Ave on Saturday Night for The 2nd Annual Benefit 2 Celebrate Life! concert with Bobby Z and Friend For the American Heart Association. The reason for the concert.. Bobby Z was in critical condition in after three blocked arteries caused a heart attack in February 2011. Doctors were able to open his blockages with three stents which has allowed Z to make a full recovery. It a way to raise money for the American Heart Association and raise awareness of Heart awareness. Quest and I talk about playing the drums along side Bobby Z, Prince, The Minneapolis Sound, J Dilla, his new books, New Album, that Epic Comedy Show that Everybody wishes they would have saw, and David Chappelle. More audio from the show coming soon.